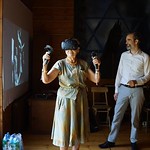 Cricoterie is a Virtual Reality project currently in development at Tale of Tales, with the support of the Tadeusz Kantor Foundation, the Adam Mickiewicz Institute and the Flanders Audiovisual Fund.

Cricoterie is based on the theater of Polish director and artist Tadeusz Kantor (1915-1990). With his troupe Cricot2 he created an experimental sort of theater closely linked to performace art and somewhat ironically to circus spectacle. In contrast to the absurd dark humor and grotesque characters, Kantor's theater focuses on death and memory and contains frequent references to war, religion, the holocaust, torture, execution, sexual abuse, and so on. Kantor's actors, mannequins, machines and props were equally valid elements in the living sculpture he created on stage. It was this presence of the director on stage during the performace and the blurred boundaries between the real and the imaginary, and the dead and the living, that triggered the idea for Cricoterie.

The project started with a month long residency in July 2017 at the summer home of Tadeusz Kantor and his wife, the actress and painter Maria Stangret, in Hucisko near Kraków. The three storey wooden cabin with a bright white tower is currently run as an arts residence by the Kantor Foundation. Every day of our residency we recorded a few seconds to several minutes of video, simply to capture the atmosphere of our day alone in the woods of Southern Poland. Totalling to over two ours, the video diary can be seen here.